Chiropractor for Herniated Disc & Back Pain in Bloomfield Hills, MI 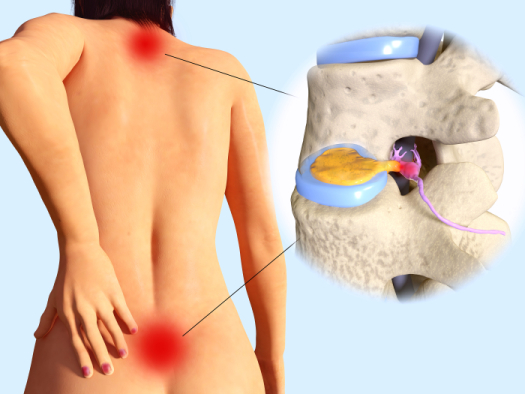 What is a Herniated Disc?

Discs are rubbery cushions that are sandwiched between each vertebra in our spines. They lessen the impact when we move, like shock absorbers in a car. Herniated discs, which are often referred to as bulging discs or slipped discs, are one of the most common reasons for seeking chiropractor care. A herniated disc occurs when the outer layer of the disc becomes damaged, and the disc’s soft interior leaks out. The disc then presses on the nerve, which causes pain that increases over time. While herniated discs can be treated if caught early, the bad news is, if left untreated, they can lead to permanent nerve damage and chronic pain and discomfort.

What are the Symptoms of a Herniated Disc?

When a herniated disc presses on a nerve, the pain and discomfort can be felt in the entire area that the nerve feeds. A herniated disc in the cervical spine – the seven vertebrae in the back of the neck – will feel like pins and needles, shooting pain, or weakness that can radiate through the shoulder, down the arm and into the fingers. A damaged disc in the lumbar spine will be felt as pain through the buttocks and down the back of the legs and sometimes in the feet.

It’s important to seek treatment at the first sign of a disc injury, as it can lead to permanent nerve damage if ignored for too long. Chiropractor for herniated disc and back pain will include an examination to determine both the severity and the location of the herniated disc. Chiropractic care will include gentle and manual adjustments or decompression treatment to realign the vertebrae, which will relieve the pressure on the nerve and ease the pain and discomfort. Call today and let Spine Plus Chiropractic align your body structurally and feed it nutritionally so you can experience better health.